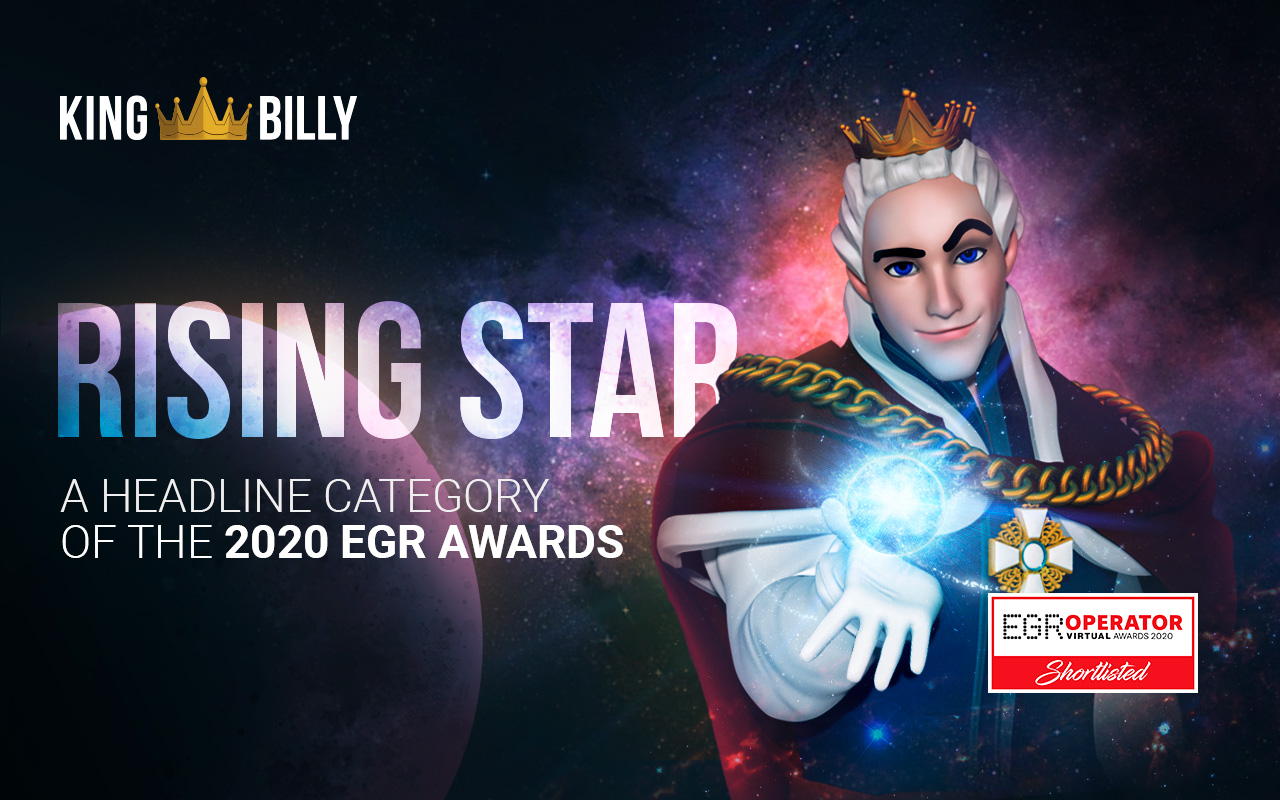 You gotta give the King Billy people credit for their choice of “title” for their King:

“His Majesty King Billy, First of His Name, Rightful Ruler of the Kingdom, Guardian of the Realm, Supreme Commander of the Royal Forces and Protector of the Players.”

And now, Collector of Awards.

King Billy has done it again. After being shortlisted in the EGR Awards in 2019 for their immensely popular Affiliate Program, they have also been shortlisted this year, and they have done so in style and in a EGR headline category: Rising Star. This accomplishment brings the casino’s total number of distinctions to 11, which is not bad for a brand in only its third year of operations.

King Billy CEO (and “First Lord of the Kingdom” as etiquette demands) Volodymyr Harkusha speaks about King Billy’s latest heroics: “Three years ago, when we got our first ever award, AskGamblers Best New Casino 2017, I was asked the same thing: to share a few thoughts about the award.

Well, what I said then still applies today, the formula has not changed! Work, differentiation, honesty, transparency and care for the player are our elements of success making us the casino of choice for hundreds of thousands of players in Australia, Canada, Japan, Russia and the EU.

Furthermore, there’s one more happy coincidence for us! Just a few days ago, we got our accreditation from Casinomeisters, one of the industry’s first and most respectable casino portals. Actually, there have been only 58 accredited casinos in the portal’s 22-year history. So, we are really proud to have made the cut!”

It seems that there is a pile of awards and accreditations for King Billy. At the end of the day, it’s good, indeed, to be the King!

The reputable EGR Operator Awards, colloquially known as the “Oscars” of the egaming sector, reward B2C operators for setting the standard in egaming excellence, with categories ranging from customer service to social responsibility, and recognizing achievements across all verticals. The 2020 Awards will be held online on November 11 & 12, 2020.

King Billy Casino is a new generation online casino, available in 6 languages (English, Russian, German, Finnish, Norwegian, and Japanese) with an impressive record of 11 awards and nominations in 3 years of existence and a dazzling variety of features. King Billy has created a superb user experience by focusing on the legend of King Billy and his Kingdom and treats all players with the attention they deserve.

Securing Your Information and Money While Gambling Online

SlotsJudge.com – Your trusted advisor in the world of slots and gambling